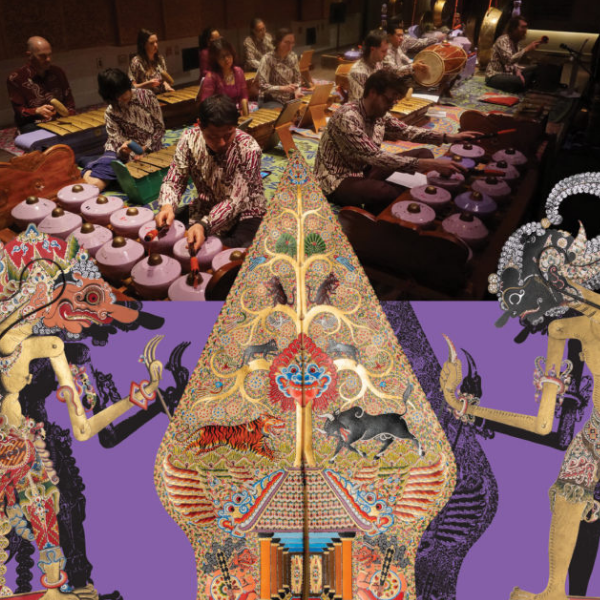 Join us for Buffalo NY’s first ever wayang kulit shadow puppet performance, “Gathutkaca’s Coronation” at Kleinhans. Puppet master Darsono Hadiraharjo performs this classic story from the ancient Indian epic Mahabarata using over 100 characters over the course of 4 hours.
Wayang Kulit performances are traditional and wildly popular multi-genre performances still practiced today on Java. They combine virtuosic shadow puppetry, enrapturing gamelan music, comedy, philosophy, and civic engagement. Performances in Java are normally 8 hours. We are producing a 4 hour show for Buffalo at Kleinhans. Leave your traditional idea of what a theater or musical performance experience is and get lost in the magic of wayang kulit. With accompaniment from Heri Purwanto (wayang drums), Heni Sativri (vocalist), and Buffalo’s own gamelan performance troupe Sari Raras Irama, and aerialist dancers from The Birds Nest.

Gathutkaca Winisudha: Gathutkaca’s Coronation
“Gathutkaca, son of the mighty Pandhawa Lord Bima, is the vanquisher of the giant king Kala Pracona and his minister, Kala Sekipu. He has been meditating intensely on Mt. Kailas, with his friends, attempting to collect on the promise of Bethara Guru (Vishnu), to become king of Kayangan, a territory in the heavens.
The aggressive King Duryudana, becomes paranoid that Gathutkaca, will start a rebellion against him in the Hastina kingdom and decides to take his brothers, the greedy Kurawas and attack. Prince Karna, and the Kurawa’s uncle, prime minister Sangkuni lead the army to the mountain.”

Darsono Hadiraharjo – dhalang puppet master – comes from a prominent family of music and theater traditions in Central Java, Indonesia.He grew up in a small village outside of the court city of Surakarta, long known as one of the major hubs for performing arts in Indonesia. Darsono studied karawitan, a genre of music played with a gamelan from Central Java. He also learned the revered art of shadow puppetry from his father and other relatives. He continued his study at Institute Seni Indonesia, a national conservatory of the arts in Indonesia. Today, he is one of the most prominent musicians inside and outside of the city of Surakarta. At the royal court of Mangkunegaran, Surakarta, he serves as the main drummer for dances performed at the court. In the surrounding villages, he is regularly featured as an accompanying musician at shadow puppet theatre performances. At his alma mater, he teaches and inspires many young generations of musicians who are mesmerized by his improvisational practices on several instruments of the gamelan.
Darsono’s first opportunity to perform abroad was when he joined the original troop for Robert Wilson’s I La Galigo, a musical theatre production based on a myth from Sulawesi, Indonesia, which premiered in Singapore in 2004. Ever since, he has traveled widely as a teacher and performer of music as well as a puppet master (dhalang) in Europe, the US, and Asia. In the U.S., Darsono has been appointed as an artist-in-residence at several institutions, including Wesleyan University, Smith College, Tufts University, Bates College, and Cornell University. Darsono believes that within the domain of the performing arts, there is a “mysterious property” that allows people from various backgrounds to naturally come together, transcend differences, and reach a deeper mutual understanding.
Hèni Savitri – sindhen vocalist – is a leading young Javanese singer and a graduate of the Indonesian Institute of the Arts in Central Java. She began to study sindhènan (Javanese singing with gamelan) in 2002. in 2003 she won the competition for best singer in her native district of Wonogiri, Central Java. She entered the performing arts conservatory in Surakarta in 2004, and began representing the institution in competitions and performing in shadow plays the following year. In 2008 she was chosen to represent the Institute in the international sindhèn festival in Jakarta. She now performs as a member of Gamelan Sari Raras, U.C. Berkeley.
Heri Purwanto – kendhang wayang drum – is a freelance musician in great demand as a performer and teacher in Java and the United States. He comes from a family of musicians and instrument makers in Wonogiri. He graduated top of his class at the prestigious Sekolah Tinggi Seni Indonesia (Indonesian Advanced School for the Arts) in Surakarta, he has taught at UC Berkeley, the University of Washington, Earlham University, Chcago, and in Buffalo. He plays all the instruments of the gamelan but is known for his drumming and his gendèr playing. This will be his second time performing with Sari Raras Irama
Matt Dunning – Music Director – Matt the founder and director of Buffalo Gamelan Club Sari Raras Irama. Fortunate to live in Indonesia for two years and study with some of the best gamelan musicians on Java, Matt was able to develop a deep understanding of Javanese performance and cultural practices. Matt is a Buffalo native and Fredonia graduate who spent time away, living in Chicago where he first played gamelan and on Java as a recipient of the Darmasiswa Indonesian Arts Fellowship. Matt leads the Sari Raras Irama performance group and serves as executive director of Buffalo Gamelan Club which teaches a variety of beginner and advance music classes and facilitates the promotion of Indonesian music and culture in Buffalo. Apart from music, Matt is a documentary filmmaker, and visual artist.
Buffalo Gamelan Club – Sari Raras Irama was founded in 2016 with the vision of creating an independent, accessible, and vibrant Indonesian arts scene in Buffalo. BGC is rooted in the traditional arts of Java, and often invites guest artists and teachers to Buffalo for in depth workshops. BGC-SRI has in it’s short existence created an impressive performance record with shows at Kleinhans, Asbury Hall, ArtPark, Hickory Urban Sanctuary, The University of PA, Music is Art, Canisus College, Allentown Festival of the Arts, Tri-Main Center, Torn Space Theater, Slyfest, Larkinville, and Canalside.
The Bird’s Nest is a community space dedicated to creative play, movement, and connection. Located just outside of the growing Larkinville District of Buffalo, this facility is the first in our region to offer classes in Circus Arts that are accessible for everyone regardless of body type, age, income, or ability.
Shadow Puppets of Java is Sponsored by:
Art Services Initiative of WNY
Buffalo Gamelan Club
Kleinhans Music Hall
KJRI New York Indonesian Consulate