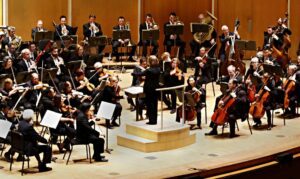 Kleinhans Music Hall was built to be the home of the Buffalo Philharmonic Orchestra, which remains the primary group in residence at the hall. Each season, the orchestra presents more than 120 Classics, Pops, Family, and Education concerts, welcoming tens of thousands of music lovers each year.

The Buffalo Philharmonic Orchestra provides a resident, professional, major symphony orchestra of artistic excellence and integrity to enrich the quality of life in Western New York through the presentation of live symphonic music and other musical events which will educate and entertain the broadest possible audiences within and beyond the Western New York region. For more information, visit www.bpo.org.

In its continuing commitment to education, the Buffalo Chamber Music Society engages available ensembles or recitalists from the series to perform in area schools in order to provide students the unique opportunity of hearing world renowned musicians in an informal setting. These visits may include masterclasses, mini-recitals and question and answer periods. This outreach program, now in its 15th year, has resulted in more than 78 performances in 30 different schools and is provided to students free of charge.

In 2002, the Buffalo Chamber Music Society established a scholarship to be given annually to a string student in Erie County who is going on to pursue a career in music. The auditions are held annually in March in collaboration with the Buffalo Philharmonic Orchestra. The Silverman Scholarship, named in memory of Clare and Oscar Silverman, has now been expanded to include up to three recipients each year.

Just Buffalo is the premier center for the literary arts in the Buffalo/Niagara region. They produce and promote community-based literary events throughout the year, including poetry and fiction readings, literary lectures, and open mics. Their signature offering is the four-part Babel series, which brings renowned authors from all over the world to the Kleinhans stage.

Just Buffalo Literary Center’s mission is to create and strengthen communities through the literary arts. Since 1975, they have striven to make Western New York a community that fully supports and values the love of reading, the art of writing, and the power of the literary arts to transform individual lives and communities.

Babel, Just Buffalo’s premier public program, was founded by Artistic Director Michael Kelleher in 2007 and launched with the help of a grant from the John R. Oishei Foundation. The series, which has featured among its literary presenters three past winners of the Nobel Prize in literature, quickly became Just Buffalo’s most popular event. Buffalo Spree magazine awarded it a Best of Buffalo award in 2009 for “Most Innovative Arts Programming, any artform.”