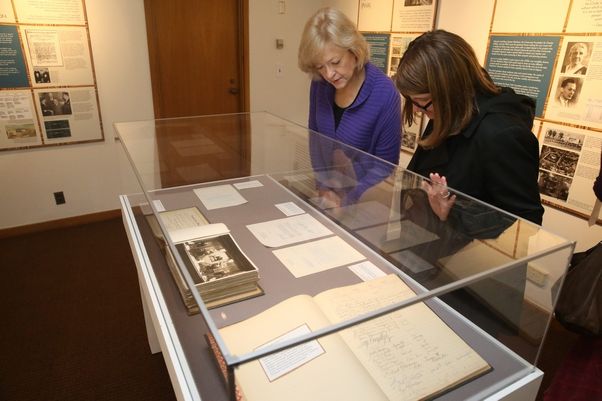 A sleek archive room showcasing the history of Kleinhans Music Hall and the couple responsible for the hall opened Thursday in what was once two adjoining storage rooms crammed with boxes of papers.

The walls of the archive room are covered with nine large panels reflecting themes ranging from the acoustics at the music hall to Edward and Mary Seaton Kleinhans, the couple whose estates paid to build the hall in 1940.

One of two glass cases contains a register, dating back to the music hall’s opening, signed by visiting performers and special guests.

“It’s an amazing who’s who of music when you look at the signatures that are here,” mused Clotilde Perez-Bode Dedecker, president and CEO of Community Foundation for Greater Buffalo.

She pointed out the large scrawl of Sergei Rachmaninoff, the Russian composer, pianist and conductor who performed at Kleinhans in November 1940.

One glass case contains an album of circa 1930 photographs of the changing fashion tableaux in the Kleinhans clothing store, which went out of business in 1992.

Several donors contributed a total of $13,000 to buy the album during an auction last December at a New York City gallery.

The archives room on the second floor opened Thursday just days before Kleinhans celebrates its 75th anniversary on Monday, one of several projects undertaken. New carpeting and new seats also were part of the improvements.

“I think, for me, this is the most fantastic moment of the summer renovations,” executive director Dan Hart said at the ribbon-cutting for the archive room. “For so many years, this material has been in a dark room, surrounded by 5 feet of garbage.”

A wall separating the two rooms was taken down and both spaces were gutted, according to Hart. The ceiling and walls were redone, and carpeting and lighting installed.

The project was paid for by a $75,000 grant by Community Foundation for Greater Buffalo, which was bequeathed by the Kleinhans estates. The couple made their fortune from the former clothing store bearing their name.

The couple, who shared a love for music and the arts, died within three months of each other in 1934 and left a will that expressed their wishes to build a music hall for the enjoyment and benefit of the people of Western New York.

With so much history to preserve, the foundation grant was made “to showcase the story of Buffalo,” said Dedecker, the foundation’s president and chief executive officer.

“This place is the history of this community in so many ways,” Dedecker said.

Beyond the musical performances in the hall, Dedecker also mentioned the graduation ceremonies, recitals and weddings that have occurred under its roof.

Hart credited archivist Lauren Becker with making sense of the historical materials, including original plans and photographs of the models for the facility that have been framed and hung in the archives room. “Lauren is the person who really came up with the final vision,” he said.

The archive room will be open during concerts and by appointment; there’s no admission charge.